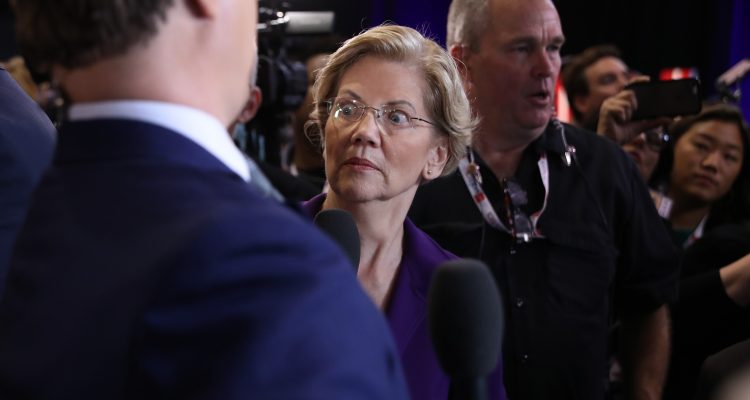 In her bid for more political power, Elizabeth Warren has once again abandoned her principles by flip-flopping on Medicare for All in favor of the current system.

Politico: “I think right now people want to see improvements in our health care system, and that means strengthening the Affordable Care Act,” she told students at the University of Chicago’s Institute of Politics this week while adding that she still wants to get to single-payer eventually.

The shift is the latest public signal Warren has sent Biden’s way in recent weeks that she wants the job of vice president — and wants Biden to see her as a loyal governing partner despite their past clashes, which go back decades.

Warren is currently making the case to be Joe Biden’s Vice Presidential pick in the hopes he values her policy focus, rather than the series of disastrous political positions she holds. Take her ever-changing position on healthcare.

In 2008, Warren said that single-payer was the most obvious health care solution before reversing herself in 2012 while running for the U.S. Senate. She made the politically expedient move in order to win an election and accumulate more political power.

Politico: “But during her first Senate campaign in 2012, she and her aides were pressed on single-payer and dodged the question again and again, according to an analysis of newspaper reports, TV, and interviews with health care reform activists at the time.”

We see the same pattern now as Warren is no longer running for President and is embracing a less radical position to please Biden and his establishment donors. The move is sure to disappoint progressives even further after she refused to endorse Bernie Sanders in the Presidential Primary, allowing activist boogeyman Joe Biden to secure the nomination.

During her run for President, Warren was a fully throated supporter of Medicare for All, supporting a single-payer system that would have eliminated employer-provided health insurance. It contributed to the destruction of her campaign as she quickly went from frontrunner to drop out.

Politico: “In June, at the Democratic debate in Miami, she made what would become perhaps the most fateful statement of her campaign — ‘I’m with Bernie on Medicare for All’ — which was widely interpreted as a strategy to align herself with Sanders on his most famous issue in order to pick off his left-wing supporters. Since then, instead of being asked what her policy is, she’s been hounded about how she would pay for the Sanders plan she adopted and whether it would raise middle-class taxes.”