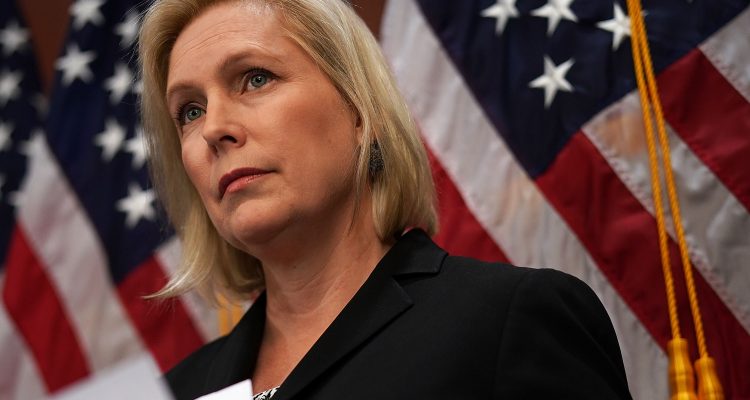 Democratic Presidential candidate and junior U.S. Senator from New York Kirsten Gillibrand announced raising only $3 million in the first quarter of her bid for the Democratic Presidential nomination. The paltry fundraising total significantly trails other Senators also running for president, as well as upstart candidates such as Pete Buttigieg.

In a memo obtained by The New York Times, Gillibrand’s campaign attempted to explain away its uninspiring numbers by blaming potential Democratic donors and primary voters for holding her responsible for Al Franken’s resignation following accusations against him of sexual misconduct:

“There’s no question that the first quarter was adversely impacted by certain establishment donors — and many online — who continue to punish Kirsten for standing up for her values and for women,” the memo, which was obtained by The New York Times, said. – New York Times (04/14/19)

“…I believe it would be better for our country if he sent a clear message that any kind of mistreatment of women in our society isn’t acceptable by stepping aside to let someone else serve.” — Senator Kirsten Gillibrand (D-NY)

Senator Gillibrand’s campaign has zeroed in on women voters as a foundation in its strategy to secure the nomination. However, Gillibrand has dealt with problems of her own in the #MeToo era. A female aide in Gillibrand’s Senate office recently resigned in protest over the handling of a sexual harassment complaint filed against a senior co-worker. According to Politico:

“In July, the female staffer alleged one of Gillibrand’s closest aides — who was a decade her senior and married — repeatedly made unwelcome advances after the senator had told him he would be promoted to a supervisory role over her. She also said the male aide regularly made crude, misogynistic remarks in the office about his female colleagues and potential female hires.

“Less than three weeks after reporting the alleged harassment and subsequently claiming that the man retaliated against her for doing so, the woman told chief of staff Jess Fassler that she was resigning because of the office’s handling of the matter. She did not have another job lined up.”

In a letter to Gillibrand and senior staffers in the Senate office, the former aide cited the office’s handling of the matter as the reason she was resigning.

“I have offered my resignation because of how poorly the investigation and post-investigation was handled,” the woman wrote to Gillibrand in a letter sent on her final day to the senator’s personal email account. Copied were general counsel Keith Castaldo and Fassler, who is now managing the senator’s presidential bid.

“I trusted and leaned on this statement that you made: ‘You need to draw a line in the sand and say none of it is O.K. None of it is acceptable.’ Your office chose to go against your public belief that women shouldn’t accept sexual harassment in any form and portrayed my experience as a misinterpretation instead of what it actually was: harassment and ultimately, intimidation,” the woman wrote.

The campaign will primarily have to depend on leftover money raised during her 2018 U.S. Senate re-election bid to make it to the Iowa Caucuses and the first round of primary contests.

Gillibrand raised only 17% of her total outside fundraising from donations under $200, ranking her near the bottom of the field. The low number signals a lack of grassroots support and indicates trouble heading into primary season.

Gillibrand currently sits in the low single digits of recent polling done of the primary field. According to a RealClearPolitics average of national polls, Gillibrand stands at 1 percent, which ranks eleventh in the crowded field of Democrats and stands thirty points behind former Vice President Joe Biden.