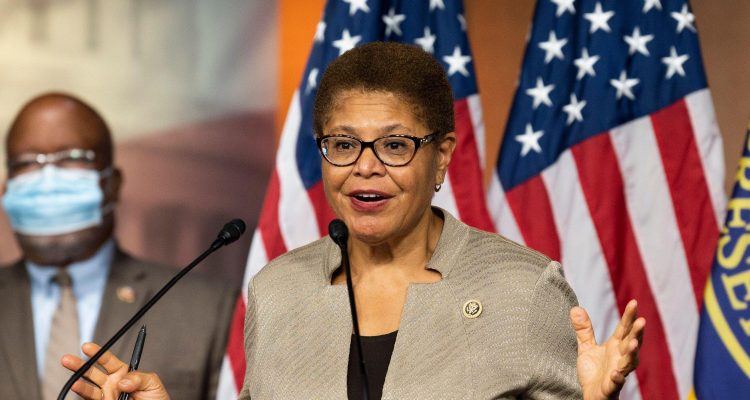 Rep. Karen Bass is presumed to be on Joe Biden’s shortlist of vice presidential prospects. As her record comes under more scrutiny, she’s spent the last several days explaining why she heaped praise on communist dictator Fidel Castro after his death in 2016.

Bass is now facing questions about the nature of her relationship with top officials associated with a controversial organization known as Nation of Islam. She attended events and was pictured with high ranking member Tony Muhammad, and even attended a forum hosted by the Final Call – the Nation of Islam’s communications arm.

The Daily Caller: “Nation of Islam leader Louis Farrakhan has referred to Jewish people as ‘satanic,’ blamed them for the Holocaust and the Sept. 11, 2011 terrorist attacks, and once praised Adolf Hitler as a ‘very great man.’ Farrakhan has also denounced interracial marriage, which he said has ‘mongrelized’ the black race.”

While Bass is now attempting to distance herself from Farrakhan and his organization, she refused to denounce him. Further complicating Bass’ defense are multiple photographs of her appearing at events hosted by Nation of Islam’s communications arm, Final Call.

“But Bass, a California Democrat, appeared alongside Tony Muhammad, the director of the Nation of Islam’s Western division, at events in 2014 and 2015. Bass is seen posing with Muhammad in a photo posted online by Mablean Ephriam, the former host of Fox television program ‘Justice With Judge Mable.’”