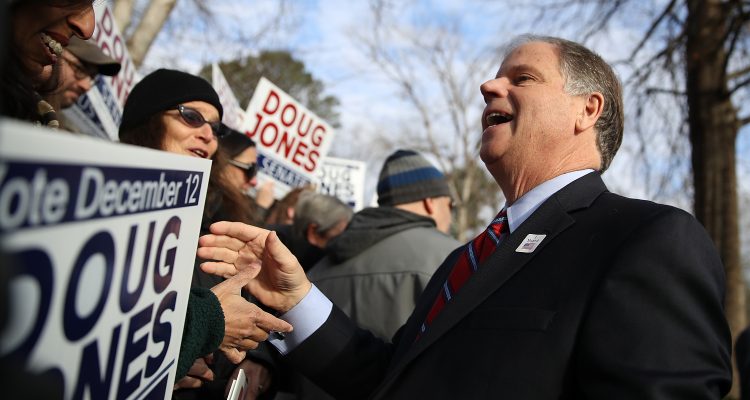 In a podcast interview with Mother Jones, Alabama Democrat Doug Jones defended former Vice President Joe Biden saying the sexual harassment allegations against him are “not for others to judge.”

When asked if the allegations against Biden distracts Democrats from the ultimate goal of defeating President Trump, Jones replied “absolutely.”

Yellowhammer: “Jones discusses Biden’s behavior with women and concludes that the allegations against him ‘distract’ from the Democrats’ ultimate goal of beating Trump.”

“Before reaching that conclusion, Jones’ remarks strayed well into “word salad” territory, with the junior senator saying at one point, ‘Where even what I believe to be, I won’t use the term ‘innocent’ because that’s probably not appropriate, but I don’t think Joe Biden ever had the kind of intention you had that in a harassing kind of way or an assaulting kind of way. But this is another step in an interesting movement and a very important movement for this country that we have to recognize more about the people on the receiving end.’”

“When pressed on whether Biden’s intent matters or not, Jones then seemingly backtracked, saying, “No,” and adding that he was “not trying to mitigate” the allegations.”

Jones and Biden have a friendship spanning several decades. Jones served as the Alabama co-Chairman for Biden’s 1988 presidential campaign, and helped Biden fundraise in the south during his 2008 White House bid. In return, Biden backed Jones in the 2017 Senate race.