What You Need to Know about Beto O'Rourke's DWI Arrest 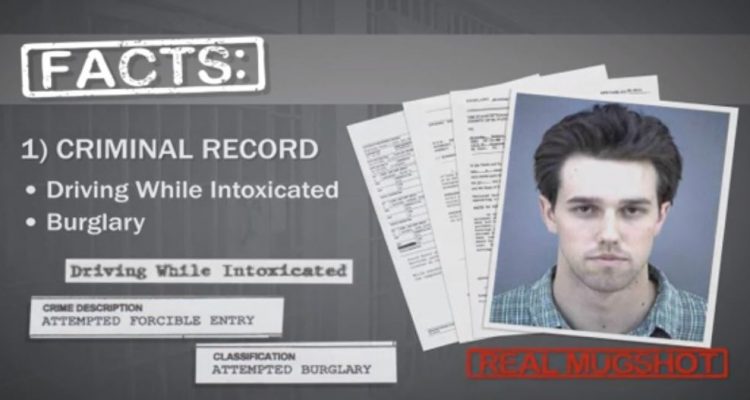 On September 27, 1998, Beto O’Rourke was arrested on his 26th birthday and charged with a DWI for driving under the influence of alcohol. The arrest occurred in Anthony, TX, roughly 20 miles north of El Paso. According to what Beto O’Rourke told the El Paso Times in 2012, he was driving an intoxicated friend home when he was arrested for a DWI. O’Rourke detailed the events of the night to Vanity Fair:

“He was at home listening to music that evening, he says, when his dad called and asked to meet for a drink at the Cincinnati Bar & Grill. The O’Rourkes drank a couple of Jameson whiskeys and afterward O’Rourke called up a college student in Las Cruces that he had dated once: “And I said, ‘Hey, I know this is really late, or late notice, but any chance you’re free tonight?’ and she was, but she says, ‘I don’t have a ride.’ So I said, ‘I’m happy to come pick you up.’”

“He drove an hour to Las Cruces and then an hour back to El Paso to drink with an old high-school friend. O’Rourke was taking his date, named Michelle, back to Las Cruces when the accident happened.”

However, the officer’s report contradicts with O’Rourke’s version of events that took place that night. According to Officer Carrera, who arrested O’Rourke, he was dispatched to a motor vehicle accident on the I-10 interstate at 3 a.m. on September 27, 1998. He makes no mention of a passenger, and reports that O’Rourke had a blood-alcohol content of 0.136

Reports say that O’Rourke was traveling at a “high rate of speed” in a 75-mph zone where he lost control and hit a truck. After the collision, O’Rourke’s car spun out into the middle of oncoming traffic and then attempted to flee the scene, according to one witness who stopped at the scene. “The driver attempted to leave the accident but was stopped by the [witness],” a police officer wrote, according to the police report.

“In another report in the records, filed with the Texas Department of Public Safety, Carrera wrote that the “defendant was unable to be understood due to slurred speech” and that he had “glossy eyes” and “breath that smelled of an alcohol beverage.” When Carrera asked O’Rourke to step out of the vehicle, he “almost fell to the floor” and was repeatedly unable to complete a test of standing on one leg. He “failed by totally losing his balance.”

When O’Rourke blew into a breathalyzer, the results were a blood alcohol content of 0.136 and 0.134. The legal state limit in Texas at the time was 0.10; a year later, it was lowered to 0.08. With a blood alcohol level of between 0.130 and 0.159, a person experiences “gross motor impairment and lack of physical control. Blurred vision and major loss of balance. Euphoria is reducing and beginning dysphoria (a state of feeling unwell).” For a male of 190 pounds, O’Rourke’s weight as listed in the police report, that blood alcohol concentration is reached after six drinks.

The charges were dismissed after O’Rourke completed a court-approved diversion program, the Chronicle said. His father had been El Paso County judge, an elective position, from 1982 to 1986 and was running for the position again in 1998 after switching parties from Democrat to Republican. (He lost.) There is no indication his father’s political prominence played a role in the outcome of the case.

In a 2018 senate race debate, O’Rourke maintained that he not try to flee the scene stating, “I did not try to leave the scene of the accident, though driving drunk, which I did, is a terrible mistake for which there is no excuse or justification or defense, and I will not try to provide one.” However, the police report disputes his claim and as a result was awarded four Pinocchios from the Washington Post fact checkers.

On April 24, 2019, the police officer that arrested O’Rourke told the Texas Tribune that they believe he tried to flee:

The former police officer who arrested Beto O’Rourke for driving drunk in 1998, along with the sergeant who signed the incident report, both say they believe now what they reported at the time: that O’Rourke tried to leave the scene of the wreck he caused.

O’Rourke admits he was intoxicated and says there is no justification for his actions, but he has denied that he tried to flee.

Hargrove, 71, oversaw the crash scene but does not remember being there. However, he said he believes what his officers told him about the two-vehicle collision that occurred in Anthony, a tiny town near the Texas-New Mexico border west of El Paso.

Hargrove said the report, which he reread after the Houston Chronicle published itlast year, shows O’Rourke “struck the [other] car from the rear and he ended up in the median pointed the wrong way, and he took that as his chance to get away.”

“He did something to lead the officers to believe that he was trying to get away,” Hargrove said. “What they put down, I believed them.”

Until now, O’Rourke was the only person present at the scene of the wreck to speak out publicly about what happened that night.

The 1998 DWI was not the only time Beto O’Rourke has a run in with the law, in 1995 he was arrested for burglary. According to O’Rourke he and his friends were “horsing around” at the University of Texas El Paso. As he explained to the El Paso Times:

“We snuck under the fence at the UTEP physical plant and set off an alarm,” he told the El Paso Times in 2005. “We were arrested by UTEP police. … UTEP decided not to press charges.”

Democrats themselves have used O’Rourke’s past trouble with law enforcement in advertisements against him. In 2012, then-Congressman Silvestre Reyes ran a TV and digital ad titled “Character Counts” that highlighted O’Rourke’s arrests. Reyes’ campaign not only attacked O’Rourke for his DUI, but also his support for legalizing marijuana, discussion of using eminent domain for a Downtown El Paso redevelopment plan, and a 2011 video of O’Rourke being highly intoxicated at a party.