What You Need to Know About Democrats’ Abortion Extremism 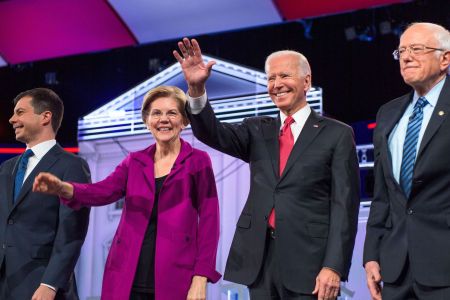 After a draft Supreme Court opinion that would overturn Roe v. Wade was leaked, Democrats rushed to make extreme and misleading statements on abortion and other divisive social issues. To satisfy their radical base, Democrats feel forced to “reject many, if not all, abortion restrictions.” However, that position risks alienating the majority of voters that overwhelmingly support some restrictions on abortion.

Katie Hobbs, the frontrunner for the Democratic nomination for governor in Arizona, would not say at what point in a pregnancy abortion should be banned. In Ohio, Nan Whaley and Tim Ryan, the Democratic nominees for governor and Senate, respectively, both refused to name a single restriction on abortion they would support. Vulnerable Senate Democrats Raphael Warnock and Maggie Hassan also won’t say whether they support any limits on abortion.

In Congress, Democrats are working on radical legislation that would legalize abortion through all nine months of pregnancy nationwide. The so-called Women’s Health Protection Act would also strike down state regulations including parental-consent and notification requirements. Additionally, it would allow non-doctors to perform abortions, even after fetal viability. The bill has almost unanimous support among House and Senate Democrats. Only one House Democrat and one Senate Democrat oppose the bill.

Democrats’ radical position is a political liability that Republicans plan to exploit in November’s midterm elections. New polling reveals most voters overwhelmingly support some restrictions — and oppose Democrats’ abortion extremism. Two-thirds oppose taxpayer dollars funding abortions and a majority believe abortion should be illegal in all or most cases. Around 60 percent of voters support 15-week abortion bans and oppose “any time, on demand” abortions.

NBC News: Republicans see a fresh opportunity to put Democrats on the defensive by pressing them on a difficult question: At what point in the nine-month pregnancy should abortion be outlawed?

They believe a Democratic Party that has moved steadily to the left when it comes to abortion is at odds with the broader population. If Democratic candidates try to appease their liberal base by rejecting many, if not all, abortion restrictions, they risk losing votes in a general election, Republicans argue. . .

Already, Republican strategists are highlighting instances in which Democrats won’t explicitly say whether they would ban abortion even at late stages of pregnancy.

Democrats have also falsely attacked the leaked opinion for jeopardizing other rights the Supreme Court has ruled constitutionally granted and protected.

WSJ Editorial: Don’t believe the claims that other rights are in jeopardy if Roe v. Wade falls. . .

That’s the parade of horribles that Democrats and the media are trying to sell Americans after the leak of a draft Supreme Court opinion that would repeal a constitutional right to abortion.

If Roe v. Wade falls, it “would mean that every other decision related to the notion of privacy is thrown into question,” President Biden warned Tuesday. . .

The leaked opinion is explicit about distinguishing Roe and its 1992 legal revision, Planned Parenthood v. Casey, from cases on unrelated social topics.

“None of the other decisions cited by Roe and Casey involved the critical moral question posed by abortion,” the draft says. “They do not support the right to obtain an abortion, and by the same token, our conclusion that the Constitution does not confer such a right does not undermine them in any way.”

Bottom Line: Democrats are launching false attacks against the leaked Supreme Court draft because their extreme position on abortion is out of touch with voters. They don’t want to inform voters, they want to scare them. It’s their only chance of stemming massive losses in November.