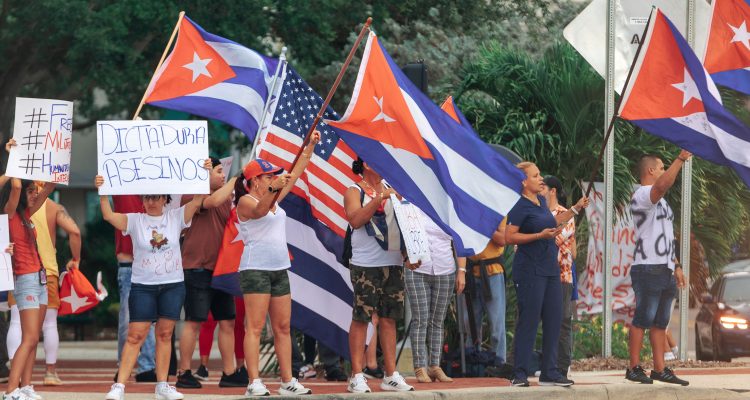 Cuban-Americans and supporters of the pro-democracy movement in Cuba gathered outside the White House to demand the Biden-Harris administration take stronger action to support the protesters in Cuba.

The #CubanAmerican community is at the @WhiteHouse demanding freedom for #Cuba. pic.twitter.com/vmQO5oOkmk

Cuban immigrant Luis Luchuga Jr., who was at the White House protest, went on Fox and Friends to plead with Joe Biden to take stronger action to support the protesters, some of whom have been jailed without a fair trial.

Fox News: “This administration has been way too slow in acting,” Luchuga said in an interview on “Fox & Friends.” “Their silence speaks volumes. It is deafening because it says a lot about maybe what their true ideology is. Is it aligned to Cuba’s? Can you not denounce what is happening and take decisive action today? No longer do we want the crumbs, we want liberty. We want it all. We want the pursuit of happiness.”

Fox News: Rubio told Levin that he was troubled by the disparity in messaging from President Biden’s Homeland Security department, particularly how Secretary Alejandro Mayorkas almost immediately announced to potential Cuban refugees that they should not cross the Caribbean Sea to seek asylum in America, while at the same time overseeing a rapidly deteriorating and porous southern border with Mexico.

The U.S. delegation to the Olympics also expressed support for the Cuban people, selecting a son of Cuban immigrants, Eddy Alvarez, to carry the American flag in the opening ceremony.

Bottom Line: Americans are united behind the Cuban people as they fight for freedom, but the Biden administration is leaving out to dry the pro-democracy protesters in their moment of need.