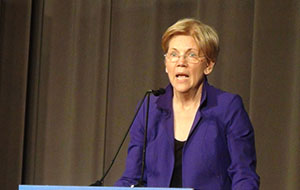 Senator Elizabeth Warren (D-MA) has made no secret of the fact that she wants to push the Democratic Party as far to the left as she can. This weekend, Senator Warren used her speech at Netroots Nation to proclaim that the Democratic Party, far from being a big tent, was only open to far-left Democrats like herself:

“In the aftermath of last year’s election, the centrist old guard is out and progressives have won the battle for the soul of the Democratic Party, Elizabeth Warren declared Saturday… In a speech that outlined Warren’s vision for the party’s future, the Massachusetts senator offered a series of policy prescriptions, calling on Democrats to push for Medicare for all, debt-free college or technical school, universal pre-kindergarten, a $15-an-hour minimum wage and portable benefits.”

Senator Warren’s Netroots speech also showcased her ability to turn on people once they no longer serve a political purpose for her. Even though Senator Warren endorsed Hillary Clinton last year, she used a portion of her speech to attack the Clintons:

“Senator Elizabeth Warren used a speech to a grass-roots conference Saturday to take direct aim at Democrats’ diminished moderate wing, ridiculing Clinton-era policies and jubilantly proclaiming that liberals had taken control of the party. While not invoking former President Bill Clinton or Hillary Clinton by name, Ms. Warren sent an unambiguous message that she believes the Clinton effort to push Democrats toward the political center should be relegated to history.”

Senator Warren’s book tour, and now a speech punctuated by chants of “Warren 2020,” leave her presidential intentions unambiguous. Another example that showcases Senator Warren’s early 2020 planning is her growing sale of merchandise throughout the country. While she is up for re-election next year in Massachusetts, the merchandise on sale has a decidedly national focus:

“Warren’s campaign store has expanded beyond traditional political fare such as buttons, bumper stickers, tote bags and t-shirts to offer a line of products that capitalize on the “Nevertheless, she persisted” meme spawned by Senate Majority Leader Mitch McConnell’s much-publicized admonishment of Warren on the Senate floor earlier this year.”