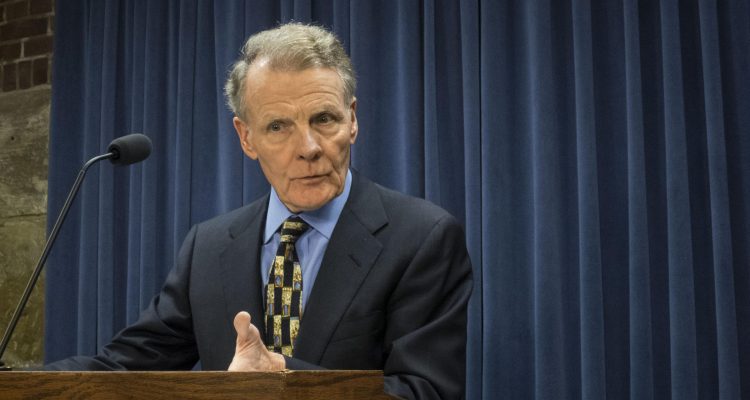 So far in 2019, seven lawmakers in Illinois have contributed a combined $750,000 to House Speaker Mike Madigan’s two political committees. They contend it is not out of the ordinary to contribute such significant sums to the state’s Democratic Party Leader. However, what is out of the ordinary is the massive legal bills Madigan has raked up in the first six months of 2019.

As of July 18, Madigan has spent over $400,000 from his campaign account on legal bills. Numerous Madigan allies are under scrutiny from federal investigators, including former lobbyist and long-time confidant Mike McClain, whose home was raided earlier this year. Another Madigan ally Mike Zalewski had his home raided in May. His son, Rep. Michael Zalewski, was one of six lawmakers who donated over $100,000 to Madigan.

Madigan’s legal expenses could also be linked to his presence in a secret recording by Ex-Alderman Danny Solis of a meeting with a developer who wanted to build a hotel in Chicago’s Chinatown.

Chicago Sun-Times: “The earliest sign of Madigan’s potential legal trouble this year came when a federal court affidavit first obtained by the Sun-Times revealed that Madigan had been secretly recorded during a 2014 meeting with then-Ald. Danny Solis (25th) and a developer who wanted to build a hotel in Chinatown.

“Though Madigan did not appear to cross any lines in that meeting, the document revealed that federal investigators have had their eye on Madigan for years. Specifically, the affidavit said they believed Solis had ‘agreed to take action in his official capacity as an Alderman for private benefits directed to Michael Madigan.’”

Madigan’s legal expenses could also be linked to multiple civil cases where he is a party. One such case is as the result of alleged shady election tactics by the Madigan team to ensure he made it through a contested Democratic primary.

Chicago Sun-Times: “Madigan was deposed in the civil case filed by Jason Gonzales, an unsuccessful primary challenger who claims Madigan planted “sham” candidates on election ballots. Gonzales’ lawyers are trying to convince a judge to let them take the case to a jury.”

The other lawsuit Madigan has faced is a suit against his political committee and the state Democratic Party over “severe and persistent sexual harassment” that went unchecked.

Chicago Sun-Times: “Another lawsuit followed the uproar early in 2018 over accusations made by Alaina Hampton, a former campaign consultant, against Madigan aide Kevin Quinn, younger brother of Ald. Marty Quinn (13th). Hampton said Quinn sent her unwanted text messages and phone calls in pursuit of a romantic and sexual relationship.

“Hampton then filed her federal lawsuit against Madigan’s political committee and the state Democratic Party over the ‘severe and persistent sexual harassment’ that she alleges went ignored for nearly a year despite her complaints.”

Observers will have to take a wait and see approach to how Madigan’s campaign spends the windfall from lawmakers. But it’s clear that Madigan is gearing up for a competitive election in 2020 for the party and carefully eyeing the wave of federal investigations impacting Illinois Democrats.