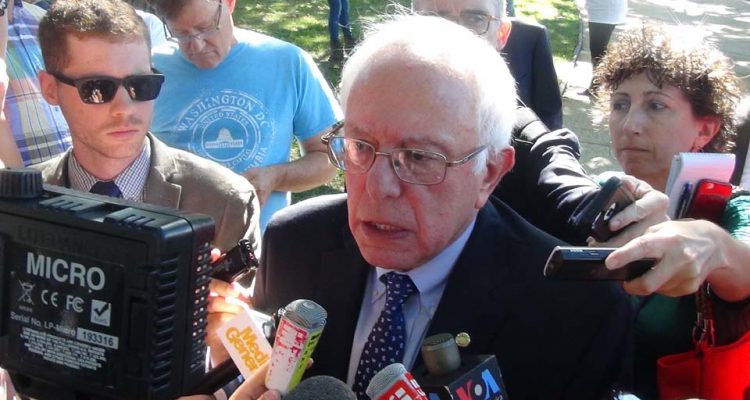 Today, Senator Bernie Sanders (I-VT) is launching his single-payer bill. In recent weeks an historic number of Senate Democrats have co-sponsored his bill. However, most of the Senate Democrats enthusiastic about single-payer have an eye toward 2020, viewing it as the main litmus test for Democratic primary voters:

“The leading Democratic prospects for the 2020 presidential race seem to have learned the lesson of the Iraq war in 2008: If the party is clearly moving in one direction, move with it. Vermont Sen. Bernie Sanders’ introduction Wednesday of a bill that would move the United States to a single-payer health care system is already emerging as a litmus test for the Democratic base — much like Iraq was in 2008, when Barack Obama campaigned against Hillary Clinton’s vote in favor of the war and Clinton resisted saying she’d been wrong.”

That view is confirmed when you compare the list of Democratic Senators thinking about a 2020 bid, with those co-sponsoring Bernie’s bill. Senators on both lists include Kamala Harris, Elizabeth Warren, Cory Booker, Kirsten Gillibrand, and Al Franken.

One group of Democratic Senators that won’t be well-represented on the list of co-sponsors are those Democrats running in states Hillary Clinton lost last year. Already Senators Joe Manchin, Sherrod Brown, Bill Nelson, Claire McCaskill, and Bob Casey are doing everything possible to disassociate themselves from Bernie’s extreme bill. Additionally, Minority Leader Chuck Schumer, who would one day like to be Majority Leader, has soured on Bernie’s single-payer ambitions.

The reason is simple, those Senators know that a bill that promises to raise taxes by trillions is deadly to their political futures. Bernie’s last single-payer bill would have cost an astounding $1.4 trillion a year. Sanders’, perhaps cognizant of the political pain his plan will cost, is already being vague about both how much his new bill will cost and the taxes needed to pay for it:

“As he described his legislation, Sanders focused on its simplicity, suggesting that Americans would be happy to pay higher taxes if it meant the end of wrangling with health-care companies. The size of the tax increase, he said, would be determined in a separate bill.”

Recent polls underscore that the American people have no desire to support a bill that would raise taxes by the trillions Senator Sanders’ plan would necessitate. A recent Kaiser Foundation poll found that support for single-payer dropped by a third “when supporters were told of criticisms that it might increase their taxes.”

Red state Democrats might hope to put a little distance between themselves and single-payer, but as long as the most prominent faces in the Democratic Party are strongly embracing single-payer, they’ll suffer from it. Yesterday, Chuck Todd pointed out that the main thing Senator Sanders’ single-payer effort is accomplishing is “driving a big wedge between the progressive left and the moderate left.” That’s very true, and it’s red state Democrats who are paying the price.