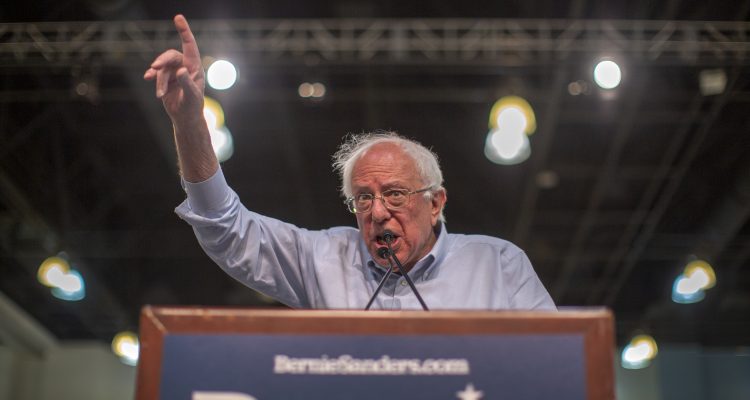 Bernie Sanders has attempted to distinguish himself from his competitors as being a purist on campaign finance and money in politics. However, his dark money group Our Revolution appears to be violating campaign finance laws as it finances federal election activity in support of Sanders’s White House bid.

AP: “Now, with less than one month to go before the Iowa caucuses, Our Revolution appears to be skirting campaign finance law, which forbids groups founded by federal candidates and officeholders from using large donations to finance federal election activity, including Sanders’ 2020 bid.”

“Last weekend, Our Revolution touted its outreach in eastern Iowa counties that voted for both Barack Obama and President Donald Trump, announcing a goal of enlisting 5,000 volunteers to help tilt next month’s caucuses in Sanders’ favor. On social media, it has amplified Sanders’ speeches and campaign initiatives while attacking his rivals. It has also sent out a steady stream of fundraising emails, which explicitly advocate for Sanders’ election.”

The group, despite past criticisms and assurances that it would, has not been fully disclosing its donors or the amounts of money that they give. When the group was established in 2016, it faced blowback for not disclosing donors.

AP: “Yet the group, which takes its name from a book written by Sanders, was beset by turmoil almost from the start with about a dozen leaving in protest. Our Revolution’s willingness to accept money from undisclosed donors, which some saw as anathema to Sanders’ message of campaign finance reform, was one of the reasons for the exodus, according to a former staffer who spoke on condition of anonymity to discuss internal dynamics.”

The AP story is full of examples of Sanders’s campaign enjoying the help dark money has provided, and how it has fostered Our Revolution’s activities, including Sanders participating in a September conference call celebrating the group’s work.

WASHINGTON (AP) — Bernie Sanders says he doesn’t want a super PAC. Instead, he has Our Revolution, a nonprofit political organization he founded that functions much the same as one.

Like a super PAC, which is shorthand for super political action committee, Our Revolution can raise unlimited sums from wealthy patrons that dwarf the limits faced by candidates and conventional PACs.

Unlike a super PAC, however, the group doesn’t have to disclose its donors — a stream of revenue commonly referred to as “dark money.”

Now, with less than one month to go before the Iowa caucuses, Our Revolution appears to be skirting campaign finance law, which forbids groups founded by federal candidates and officeholders from using large donations to finance federal election activity, including Sanders’ 2020 bid.

A debate over big money in politics has riven the Democratic primary with Sanders and fellow progressive, Massachusetts Sen. Elizabeth Warren, leading the attack on rivals including former Vice President Joe Biden and former South Bend, Indiana, Mayor Pete Buttigieg, who have relied on big-dollar donors.

But while Warren has come under fire for courting wealthy financiers in her past Senate campaigns, Sanders and Our Revolution have largely avoided scrutiny during the primary, even as he has accelerated his criticism of others, among them Biden, for relying on super PACs founded by their allies.

In the case of Our Revolution, which aims to boost voter turnout for Sanders, the Vermont senator was the founder.