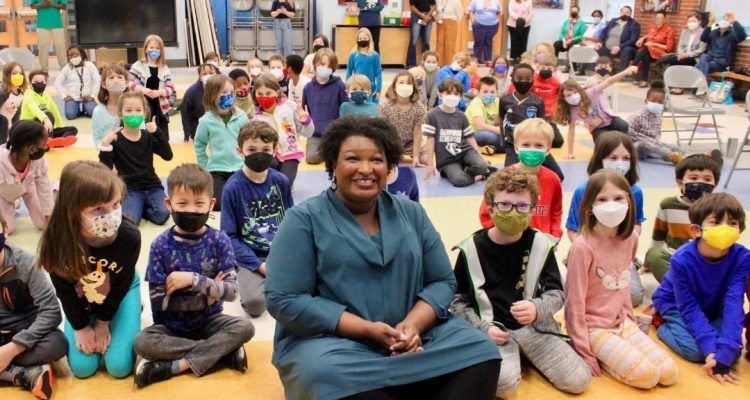 Democrat and gubernatorial candidate Stacey Abrams posted a photo of herself indoors without a mask, surrounded by masked-up students. Abrams’ mask hypocrisy is just one example — Nancy Pelosi, Gavin Newsom, Gretchen Whitmer, and many more have been caught violating their own masking advice and official mandates.

New York Post: Democratic star and Georgia gubernatorial candidate Stacey Abrams has sparked outrage after tweeting a photo of herself posing indoors with masked-up students — without wearing a mask herself.

Abrams, 48, joins many of her Democratic peers including California Gov. Gavin Newsom and San Francisco Mayor London Breed, who have been seen gallivanting indoors without masks despite supporting strict face-covering mandates. . .

Abrams, who is vaccinated, has been a vocal supporter of mask mandates throughout the pandemic. In July 2020, Abrams slammed Republican Gov. Brian Kemp for his ban on mask mandates, saying it showed “incompetency” and “immorality.”

After Abrams deleted the photo, Kemp — who is running to beat Abrams a second time — reposted it and slammed her for supporting state-wide mask rules.

But it looks like they wouldn’t apply when she’s attending a photo op. https://t.co/A7H8U6eXKS

Parental anger over school closures and Covid-related mandates are politically toxic for Democrats, who are already panicking about losing their narrow majorities in Congress. Reporters speculated that the photo would appear in ads running up to November’s general election in Georgia.

Bottom Line: Democrats believe in two sets of rules: one for themselves, and another for the rest of us. Americans are frustrated with the never-ending mandates and Democrats’ hypocrisy on the issue will cost them at the ballot box this November.