The Pelosi Crumbs Tour Passes Through Texas And Arizona 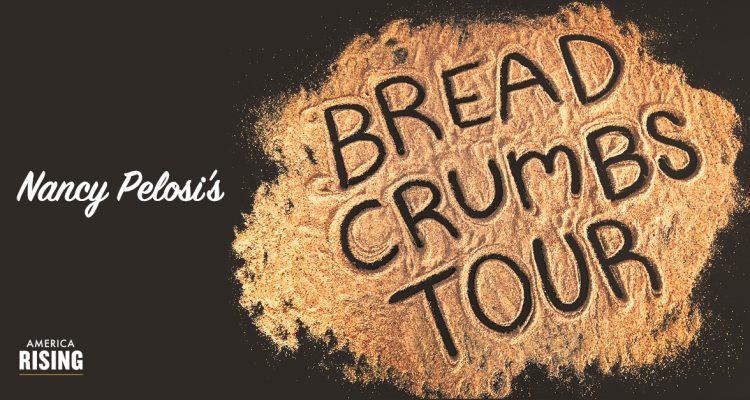 Nancy Pelosi once again repeated her widely mocked “crumbs” comment in reference to the bonuses, wage increases, utility rate decreases, and new benefits Americans are seeing thanks to the GOP tax reform law.

Yesterday while fundraising in Texas, Pelosi doubled down on the “crumbs” comment:

House Minority Leader Nancy Pelosi, passing through San Antonio on Monday as part of a national fundraising and speaking tour, slammed the GOP tax bill as “theft” and “stealing from young people’s future,” while doubling down on her description of one-time bonuses resulting from the bill as “crumbs.”

“This tax bill is bad not only in itself, but for what it does to the budget,” Pelosi said. “Our national budget should be a statement of our national values. … But this bill, the budget the president just presented, it is not values-based, nor does it have that spark of conscience.”

Castro, a Democrat from Texas’ 20th District, conceded that the bonuses handed out by certain companies are beneficial, but pointed to the layoffs some of those same companies announced in the following weeks.

Speaking to reporters after the panel, Pelosi said she stood by her likening of the bonuses to “crumbs,” which has turned into a rallying cry of sorts for Republicans. During the panel, she said while the bonuses are “nice,” they are not a worthy substitute for wage increases — which she called the “most vital thing that we can do to grow our economy.”

Later today, Pelosi will be in Phoenix for another town hall to repeat her “crumbs” attacks on these benefits Arizonans are seeing:

YAM Worldwide Announced It Would Provide $2,000 Bonuses To 725 Employees Who Have Been With The Company Longer Than Six Months And $1,000 Bonuses To All Other Staffers. (Jackie Wattles, “Billionaire Bob Parsons Praises Tax Bill And Promises Staff Bonuses,” CNN Money, 12/22/17)

Western Alliance Bancorp Said It “Plans To Increase The Base Pay Of The Lowest-Paid 50% Of Employees By 7.5%,” Increase Bonuses, And “Increase Its 401(K) Match From 50% Of An Employee’s Contribution Up To 6% Of Pay To 75% Of An Employee’s Contribution Up To That Same Level.” (Rachel Louise Ensign and Christina Rexrode, “Banks Are Getting A Big Tax Cut. Wells Fargo, Others Plan To Share It With Employees,” The Wall Street Journal, 12/20/17)

Lowe’s, Which Employs Over 4,100 Arizonans, Will Provide Bonuses Of Up To $1,000 To Part- And Full-Time Employees, While Expanding Its Benefits Package Pertaining To Paid Maternity Leave, Paid Parental Leave, Adoption Assistance, And Faster Eligibility For Health Benefits. (Lauren Thomas, “Lowe’s To Give Some Employees Bonuses Of Up To $1,000 And Expand Benefits Due To Tax Reform,” CNBC, 1/31/18; “Arizona Republic 100: State’s Largest Employers In 2017,” Arizona Republic, 4/4/17)